skip to main | skip to sidebar

Our house is in SERIOUS need of some landscaping! Today, we decided it was time to do something about it. Apparently, just gazing out the window, shaking our heads, and hoping some beautiful flowers would overgrow the weeds wasn't quite enough. We woke up early this morning and within an hour had 3 huge bags of weeds (the 30 gallon yardwaste paper bags) and a large trashcan full of this horrible 'Juniper' groundcover that has bothered me ever since we moved in. It pulled out in one great big 'carpet'. It was so nasty!

I forget how much my boys like being busy! They were actually really helpful, especially Matt. He pulled all the weeds in this one corner and filled an entire yard waste bag himself! Twelve hands working, even when 8 of those hands are rather small, are much faster than just 4 hands. We then went to this great local nursery and browsed their plants. One of the helpful ladies, even helped me draw a plan! So, now we at least have an idea!
Here is a 'before' photo. 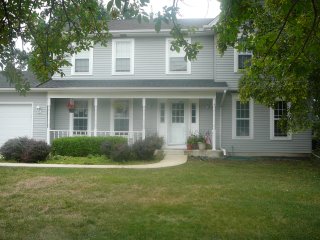 Next week, we hope to pull out those ugly red bushes, and put down a nice layer of garden mix soil to even out the beds. Then, maybe we'll plant some, bushes and flowers! Yea!
Posted by alligood at 8:10 PM

“Adversity will be a constant or occasional companion for each of us throughout our lives. We cannot avoid it. The only question is how we will react to it. Will our adversities be stumbling blocks or stepping stones? Our responses will inevitably shape our souls and ultimately determine our status in eternity. Because opposition is divinely decreed for the purpose of helping us to grow, we have the assurance of God that in the long view of eternity it will not be allowed to overcome us if we persevere in faith. We will prevail. Like mortal life of which they are a part, adversities are temporary. What is permanent is what we become by the way we react to them.”

Matt's Tumor (Click on the tiny box in the right hand corner to see a larger, clearer view).

The strongest children you will ever meet

alligood
My name is Allison and this blog highlights the ups (lots of laughs and energy) and the downs (um, scrubbing toilets) of life in a family full of little boys (and one adorable baby girl!) We have 5 boys (ages 11, 8, 6 yo twins, 2 and 10 months). Our oldest son has brain cancer, so this blog follows his journey as well!