skip to main | skip to sidebar

Almost exactly one year ago, on Thanksgiving day, Will broke his arm..... (See post, here).

Since Drew can't handle that sort of one-upmanship, he decided that not only would he break his arm, he would out-do Will by completely snapping his humerus in two places. He also thought that emergency surgery and staying overnight in the hospital would really show Will and his other brothers how this broken arm thing is done!

Truly, I wish I could figure out how to put a copy of his X-ray on my blog! His arm was literally in 3 pieces with the small middle broken bone turned sideways - his arm bone looked like a 'Z'.

On Sunday afternoon I was in a cooking mood. I had a yummy smelling pot roast in the oven with potatoes and carrots, a fancy salad, and homemade challah bread. I was putting the last touches on dinner and waiting for the roast to finish when I heard Drew start to cry. He and Will had been playing nicely upstairs (or so I thought!) When I went to the stairs I noticed Drew holding his arm funny - it was sort of hanging there and not moving. When I unbuttoned his shirt and saw his arm I just calmly told Nate to 'go get Dad right now'. Drew's arm was very clearly broken. We left the 4 other boys with Diana and went right to the Emergency room.

At first, the only story we got from Drew and Will was that Drew was getting a piggy back ride from Will. The ER doctor really questioned this (making me feel like an awful mom!) He said that breaks this severe don't happen if a child falls off a piggy back ride. Upon further questioning, it seems Drew was getting a piggy back ride ON WILL'S SHOULDERS! Apparently, Will sat on the edge of the bed and told Drew to climb on his shoulders. When Will went to stand up (with Drew) he lost his balance - Drew is only about 10-15 lbs. lighter than Will! Will stumbled forward and Drew toppled off his shoulders, hyper extending his arm on the way down and snapping his arm.

So, the ER doctors had to call in the Orthopedic surgeon who took one look at the X-rays and said Drew needed to be in surgery ASAP to avoid nerve damage. Within the hour, Drew was taken to surgery. Luckily, the doctor didn't have to open up the arm, he was able to set the break with pins. That was the best possible solution for the severity of the break, so we were happy. Drew spent the night in the hospital and we arrived home around noon on Monday.

Yesterday we went back for a follow up. Drew was having some pain in his arm, despite the fact that he was on a maximum dose of pain medication). They took X-rays again to rule out the pins shifting and also checked him closely for infection. The doctor determined that it was most likely nerve pain or his arm had gotten bumped a bit. He decided to go ahead and put Drew in a hard cast, rather than waiting until Monday when it was originally scheduled.

So, here you have "New Blue Cast" version Drew! 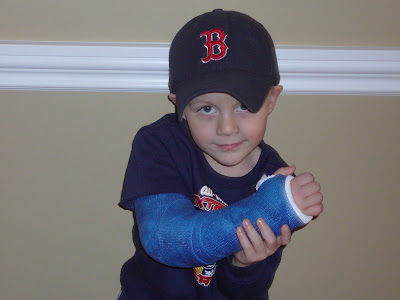 Posted by alligood at 9:05 PM 12 comments: Links to this post

This year, our computer crashed. I've gotten a good lesson in backing up files (I lost all of my photos, music, and other files) and also a good lesson in not turning your 'old' computer into the 'kids' computer until you take your Christmas card list and put it on your new computer!!! Alex (my computer whiz kid brother) was able to retrieve a majority of my files, but right now my hard drive from the old computer is at his house waiting for me to go through every computer file and stick it where it belongs - I anticipate this taking several months once I actually begin....

Anyhow, I am hoping that you guys can all send me your addresses so I can re-create my Christmas card list. The thought of hunting down all of our friends from New York, Boston, and Chicago is a little overwhelming at the moment! Please email me at:

Thank you everyone!!!
Posted by alligood at 12:17 PM No comments: Links to this post

“Adversity will be a constant or occasional companion for each of us throughout our lives. We cannot avoid it. The only question is how we will react to it. Will our adversities be stumbling blocks or stepping stones? Our responses will inevitably shape our souls and ultimately determine our status in eternity. Because opposition is divinely decreed for the purpose of helping us to grow, we have the assurance of God that in the long view of eternity it will not be allowed to overcome us if we persevere in faith. We will prevail. Like mortal life of which they are a part, adversities are temporary. What is permanent is what we become by the way we react to them.”

Matt's Tumor (Click on the tiny box in the right hand corner to see a larger, clearer view).

The strongest children you will ever meet

alligood
My name is Allison and this blog highlights the ups (lots of laughs and energy) and the downs (um, scrubbing toilets) of life in a family full of little boys (and one adorable baby girl!) We have 5 boys (ages 11, 8, 6 yo twins, 2 and 10 months). Our oldest son has brain cancer, so this blog follows his journey as well!